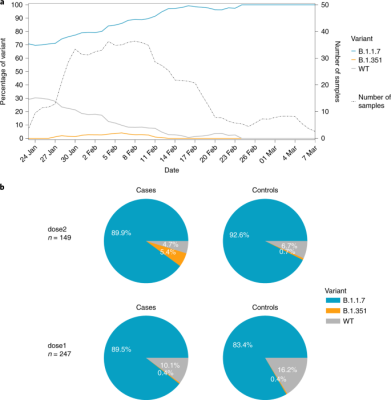 Laura Boekel and colleagues pooled data from two large ongoing prospective cohort studies and analyzed post-vaccination serum samples for evidence of breakthrough infection. They report that the incidence of breakthrough infections was comparable between patients taking immunosuppressants and controls. Hospitalization was required in similar proportions in both groups—and in general hospitalized cases were older, and had more comorbidities compared with non-hospitalized cases.

The Physics of Gut and Brain Health

The Physics of Gut and Brain Health 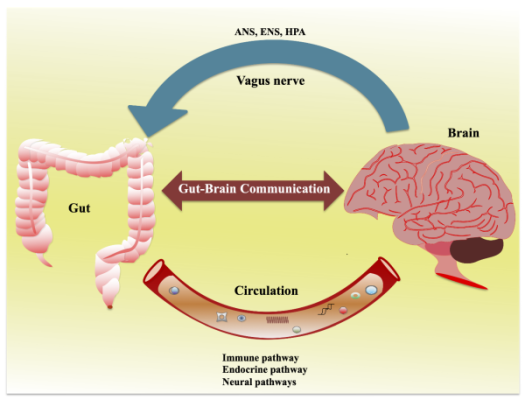 Since he was young, Chih-Wei Joshua Liu ’22 always knew he wanted to be a “physician-scientist,” pursuing research at the intersection of basic science and medicine.

“Growing up, I wanted to do work that concretely helps people,” says Liu. “I also wanted to further our understanding of the universe. Physics describes how nature behaves. From equations, we can derive behavior. In biology and medicine, this behavior is extremely complex. I’ve always wondered how these sciences combine: If we can put nature’s beautiful complexity in the language of mathematics, then the world makes sense.”

As the son of a physician and a computational biologist, he was exposed early on to a life in research. His family moved from Taipei to Dallas, Texas, and the San Francisco Bay Area before returning to Taiwan during his high school years, when his father joined the faculty at Taiwan’s National Health Research Institutes.

He competed in the Biology Olympiad while at the National Experimental High School, an international school run by the Taiwanese government for foreign-raised children of Hsinchu Science Park employees. Hsinchu Science Park centers on Taiwan Semiconductor Manufacturing Company, which was founded by MIT Corporation board member Morris Chang ’52, SM ’53, ME ’55.

“People at my high school think of MIT as a place where you can make a difference in the world,” Liu says. Drawn to the Institute, both Liu and his twin brother, Chih-Lun Julian, applied to MIT. His brother was then more interested in computational linguistics, while he was drawn to biochemistry and computational biology.

“Much of the most important research in condensates has been at MIT,” he says. “I started going to a biomolecular condensate journal club in my first semester as a freshman and realized that, to really understand condensates, I needed statistical thermodynamics. I was disappointed to learn I couldn’t get very far without physics.”

Having struggled with high school physics, he was apprehensive about the Institute’s physics General Institute Requirements (GIRs). “When I took 8.01 with Professor Kiyoshi Masui, I realized that MIT physics — especially the world-famous TEAL [Technology-Enhanced Active Learning] format used for 8.01 and 8.02 — is quite different from multiple-choice AP physics.”

With a strong grasp of Newtonian mechanics, he pushed himself to take the more challenging follow-up class, 8.022 (Physics II: Electricity and Magnetism). From there, he surprised himself by declaring his major as physics.

“The physics GIRs pushed me to branch out academically. I TA’d 8.01 my sophomore year and enjoyed helping other students develop skills and interests in physics.”

He shifted away from biomolecular condensates and pursued research in other areas of biophysics, beginning with work on an experimental evolution approach to engineering microbiome therapeutics with Professor Jeff Gore.

“A long-standing goal in medicine is the ability to tailor microbes to patients’ specific metabolic needs; outside microbes with potentially useful functions don’t usually survive when inserted into patients’ microbiomes,” he says. “We evolved bacteria isolated from the human gut to degrade the compound that causes kidney stones. I found this project exciting because we used mathematical modeling to control the evolutionary trajectory of bacteria in the lab, as well as to engineer something that could have real medical applications.”

In 2020, he began working with Professor Nikta Fakhri on machine-learning approaches for measuring entropy production in biological systems.

“Physicists believe time irreversibility is a key property of life; biological processes irrevocably increase the entropy of the universe,” he says. “However, it’s difficult to actually measure irreversibility. We are using a new machine-learning algorithm to do exactly this. Rho GTPases are a conserved cell-division regulator in almost all animals, including humans and the starfish we use experimentally. Using our neural network, we have quantitatively measured the arrow of time in this crucial biological system; Rho is implicated in cancer, among other diseases.”

He presented this work at the March Meeting of the American Physical Society, and plans to soon submit a joint first-author manuscript for review.

“I know a lot of people who have struggled with mental health issues,” he says. “MIT is a pretty stressful place, and a lot of people struggle when they get here. This is an issue I really wanted to get involved in.”

This drew him to the pressing problems of mental health on and off campus.

During the pandemic, he joined the MIT Wellbeing Ambassadors to distribute Covid-19 guidelines and personal protective equipment to students remaining on campus during the pandemic. As president of Active Minds and Peer Ears, he led the merger of MIT’s two mental-wellness peer-education groups, and worked with MIT’s Office of Student Wellbeing and clinicians at Student Mental Health and Counseling Services to provide undergraduate students and organizations with active listening training.

Last summer, as a PKG Social Impact Intern at the Massachusetts General Hospital (MGH) Department of Psychiatry, he used instant smartphone surveys to track time use in people with schizophrenia-spectrum and bipolar-spectrum disorders. By analyzing the data, he saw the emergence of the effects of race and socioeconomic status on functioning in people with severe mental illnesses, which he is writing about for the journal Clinical Psychological Science.

“I hope my work will help future psychiatrists address racial and socioeconomic inequities in caring for people with severe mental illnesses,” he says.

For his own method of stress release, in his first year he shared his love of post-hardcore punk rock with a 2 a.m. show on WMBR, until he realized it didn’t work with his schedule. He is president of MIT’s Society of Physics Students, which organizes events for Course 8 undergraduates such as study breaks, movie nights, and the annual PRISM research conference. He has served on the Physics Values Committee, a departmental committee of faculty, staff, and students working together to improve underrepresented-student recruitment to MIT physics, and to support more inclusive faculty advising.

He was also community service chair and associate member educator at his fraternity, Phi Kappa Theta. As community service chair, he sourced 12,000 face masks from the Taiwanese government during the 2020 U.S. mask shortage and organized a fundraiser to purchase these masks and donate them to Beth Israel Deaconess Medical Center. “It has been one of my defining experiences at MIT,” he says.

Next stop: Research and MD-PhD

He is applying to MD-PhD programs to pursue research at the intersection of biostatistics and statistical mechanics. In the meantime, he will continue his research in Fakhri’s group, studying recently identified “non-reciprocal” phases of matter in drug-resistant bacteria.

As a future physician-physicist, Liu hopes to apply the mathematical techniques he picked up in his physics classes to help those struggling with mental health issues.

“I hope to apply fundamental physics to the pressing problems of human health,” he says. “Non-equilibrium thermodynamics has recently proven its potential in fundamental biology. I believe the same theoretical framework might be just as insightful in translational medicine.”

It’s “now or Never” on Climate Change, but That Doesn’t Mean We’re Doomed 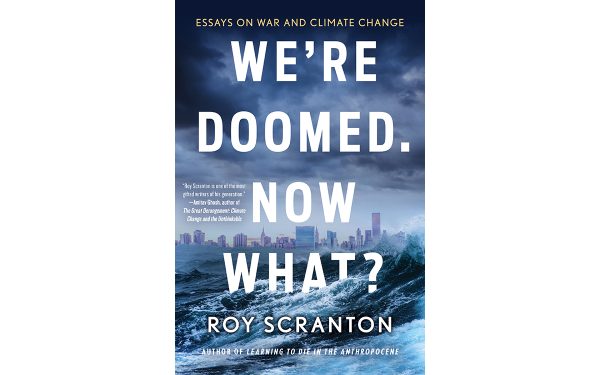 Preparing for the next pandemic at Ars Frontiers. Click here for transcript. (video link)

Human beings have made tremendous scientific and technological breakthroughs, but our continued social and cultural advancement has come at the expense of our planet’s ecosystems, endangered by human-driven global climate change. Ars Science Editor John Timmer joined climatologist Michael Mann of Penn State University (moving to the University of Pennsylvania this fall) and Sally Benson, deputy director for energy and chief strategist for the energy transition at the White House of Science and Technology Policy (OSTP), for a spirited discussion about the existential threat of climate change; viable—and ethical—solutions to that threat; and the need to face the grim reality the planet faces without giving in to so-called climate “doom-ism.”

The discussion took place in the wake of the most recent report from the Intergovernmental Panel on Climate Change (IPCC)—technically the third and final section of the 6th Assessment Report—concluding that the next few years are a critical window of opportunity if we hope to limit global warming to the benchmarks of 1.5° C or 2° C. The good news: There are signs of clear progress, most notably an acceleration in the growth of the clean energy sector. The bad news: We are at the peak of the so-called emissions curve, so emissions must begin declining now. Jim Skea (co-chair of the group behind the report), described it as a “now or never” scenario.

New Drug Combination Lengthened Survival for Some With Lung Cancer 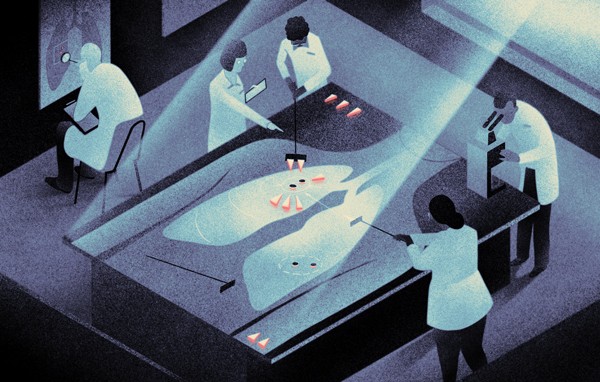 A study conducted under the Lung Cancer Master Protocol (Lung-MAP) found that patients with advanced non-small cell lung cancer whose cancer had progressed on previous immunotherapy lived significantly longer when treated with a combination of ramucirumab (Cyramza) plus pembrolizumab (Keytruda) than when treated with one of the current standard therapies for this type of cancer. The hazard ratio (with 80 percent confidence interval) for overall survival (OS) time for patients on the investigational arm versus the standard of care arm was 0.69 (0.51-0.92). Median OS times on the two arms were 14.5 and 11.6 months, respectively.